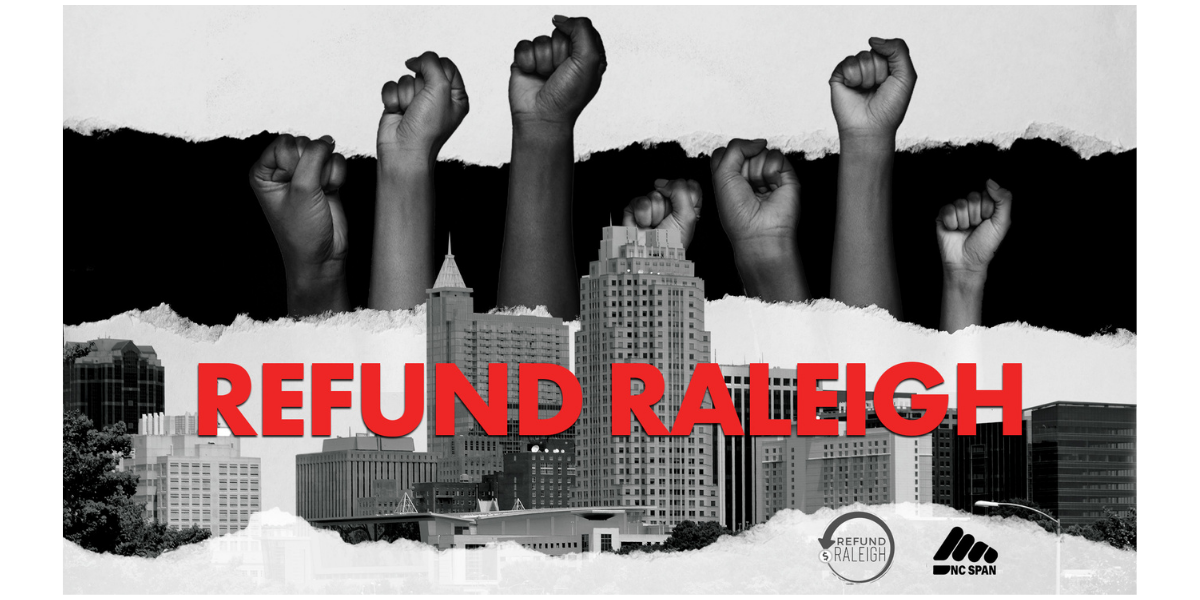 Free Bus Fare and Higher Wages is Possible in Raleigh, Here's Why

Free Bus Fare and Higher Wages is Possible in Raleigh, Here's Why

The Refund Raleigh Freedom Committee bloomed amid the uprisings against police violence in late May of 2020 to activate the people of Raleigh towards a vision of meaningful safety – like dignity jobs, housing, healthcare, education – and away from policing and prisons. Despite the efforts of the ruling and media classes, we are not fooled into believing that police are meant to keep people safe. Police and prisons are violent, deadly, and the reason we protest in the streets.

Raleigh is currently being taken over by million-dollar developments and empty apartment buildings, while many people are being abandoned and criminalized for being unhoused. Like many abolitionist organizers all over the country, we began following the money to understand the root cause of the problem. Our research found that Raleigh was spending more of our tax dollars on policing the working class than anything else. In 2020, they spent $111 million on police – ten times more than they spent on housing.

We began asking folks what they would want to do with $111 million to keep their community safe. In less than 72 hours, we received over 500 responses to an online survey. People from Raleigh emphasized that they knew what would keep them safe, proposing that the money could go to healthcare, jobs, education, gardens, parks, art centers, restorative justice resources, and addiction treatment programs.

Check out Refund Raleigh’s post to see how people in Raleigh define safety and community.

People were ready to speak to the needs of their community. Still, their representatives on the city council were so deep in the pockets of ruling class developers that representing these ideas did not matter to them. The connection was clear: policing poor and working-class people was crucial to maintaining the rule of the elite developers in Raleigh, so that’s where the city council was going to put our dollars.

With the input from our community, we understood that the issue of police violence was entirely connected to economic injustice and lack of dignity jobs, housing, and basic needs for our community. Our collective decided to launch a divestment campaign called Divest from Police Injustice, Invest in Economic Justice in 2021. We demanded:

And, FREE bus fare for all people in Raleigh to get to work, school, and live fulfilling lives.

We did the math and calculated that Raleigh could pay for these demands entirely by reducing the number of Raleigh Police Officers by 30%. None of us were math people, so tackling the budget was daunting at first, but we were connected to these tools (linked here) that made the process pretty straightforward.

Leading up to the Raleigh City Council’s budget vote in June 2021, our campaign focused on working to inform the public of our demands through canvassing, hosting community events, publicizing our demands’ petition, and meeting with city council members. In February of 2021, we officially kicked off our campaign by publishing a booklet on the history of police violence in Raleigh to account for the ways Black people and poor people had been targeted by Raleigh Police. We intended to honor the local legacies of fights against police violence and expose the ways some historical demands (such as calls for community-run review boards) were co-opted and not always in line with changing the conditions that created police violence in the first place.

We made hundreds of copies and mailed them to all those who requested them. We canvassed thousands in downtown and surrounding neighborhoods in Raleigh, which resulted in over one thousand petition signatures. Many of our volunteers were from other organizations that we were in coalition with – including Raleigh DSA, the UE 150 union (the City Workers union), the National Coalition of Black Lawyers (NC Chapter), and Muslims for Social Justice.

How much is Wake County spending on law enforcement in 2022? NCSPAN and NC BTC have the numbers:

In November of 2021, we hosted a candidate forum with Wake District Attorneys, Mayor, and City Council Candidates. All candidates present at the forum committed to not accepting money from police unions or developers. Also, we tested their understanding of divestment/investment strategies, gentrification, and housing issues in Raleigh and asked them how they would work with the community to stay accountable to us. In 2022, we are building a coalition of organizations committed to using the local elections to push forward our divestment agenda with workers’ rights and living wages at the center of our strategy for meaningful safety and resources for all.